This entry is incredibly hard to write. The more you open up the more you become willing to be ridiculed. I also came to realize that this is my truth and my journey and sometimes in life we just can’t make others happy so at the very least we owe it to ourselves to live our best version of our lives that we can.
There’s a peace that comes over you when you are about to leave your body, a calm and I even thought bright lights but being on the operating table could explain this. I remember looking down at my husband with his head in his hands and reaching for him to tell him that it would be ok. I remember thinking that he would only be ok if we were all ok, so there began my struggle to make it back. We have all heard this side of the storey but in order for it all to make sense we need to go back to the Spring of 2017.
I was still in New York for my Beauty School seminars and remember being quite mad at my husband. We had a huge fight and names were called and I just didn’t think it was going to work out. That was only 6 months of dating so that in fact was 6 times my record already…progress. We were still on speaking terms so that night when he called me he told me he met this cat named Titus and he wanted me to meet him when I got back. There was something super special about Titus he only had three legs.

When we went to meet Titus I instantly fell in love. The way he adapted to losing his leg and his zest and love for life I knew I needed him in my life. We applied to be his new home but their was a family ahead of us. I was really sad and my hubby told me not to worry that were hundreds of cats we could give a home too. I suppose but I really wanted to share my life with Titus!!
We went home to give some love-ins to our four cats and were just enjoying each others company when the phone call came in. You see it appears Titus was a Hermaphodite and when it came to an animal finding their furever home a full medical disclosure must be made. When the family found out his history they quickly passed on him. I don’t know why maybe it was a fear of having to explain eventually what that meant to their two young girls. Either way Titus was ours and Herbert came home ❤
It was until we started reading his medical history that his true life storey was known. You see as a kitten he was left outside in the elements doing what kittens do. A bag passed him in the wind and he began to play, the bag caught around his front leg and cut off the circulation. He carried a dead leg around for months until finally somebody brought him to AARC's and a complete amputation was done on his front leg at the shoulder.
The only history I needed to know was that he needed Love and that as a being he was worthy of it. Shortly after we brought him home we found out we were pregnant, then we got married and our love storey began to blossom.
Herbert always maintained a distance when it came to our family. Kindof the outside looking in. He always appeared when you needed him most but he was never that far away. Looking back on his life now I could see he was just an observer of our family. He was sent to us to keep our family together as times were about to get really rough. In the summer of that year was when I was told they suspected kidney failure, I was contantly sick, had terrible headaches and was just miserable. Every morning like clock work though Herbert would crawl onto my side of the bed and nudge me awake and sing and cry till I got up. That was the best part of my mornings ❤
The fateful night of my seizure it was Herbert that stood guard at the bathroom while the paramedics did their work. All the cats were present but he was front and center. I will always believe that he was my angel, my soul mate. We can connect with any being on that level providing we have an open heart.

When Herbert finally left us after 11 short months it was really hard on me. I was at home alone with a newborn with a giant hole in my heart. Being able to function and provide a happy loving environment for my son became my top priority but my thoughts always drifted to Herb. I needed to find a way to make my heart hurt less and for me to find happiness again. “It was then that I read a quote about soul mates that said when reunited with somebody who awakens your soul that that love is so powerful that you can only hold onto it for a short period of time.” After reading this it all became clear. I didn’t feel so crazy anymore for feeling those intense feelings of love. The love I felt for him was real and it was still there. He served his purpose to see us merge into one happy family and to inspire us to want to help more animals. I could use that love we shared to do something great in this world and to make a difference. I wasn’t sure how yet but I wanted his storey to be known and for his legacy to live on.
Then like an answer from the Heavens we got gifted our house. We have 3 levels and a huge backyard. My husband ok’d my application to foster cats. Shortly after us moving into our house (and I mean shortly) we had fostered (and failed) our first cat. With that fresh in our minds we discovered that AARC’s (Alberta Animal Rescue Crew) had a huge need for Whelping homes. Whelping is simply you help out the puppies and their mom’s with the birthing and baby/toddler phases in life. Basically up until the time they are ready to be fixed. It was literally one of the greatest moments of my lives. The love an animal gives you when you take them in and give them love back there is no greater feeling. 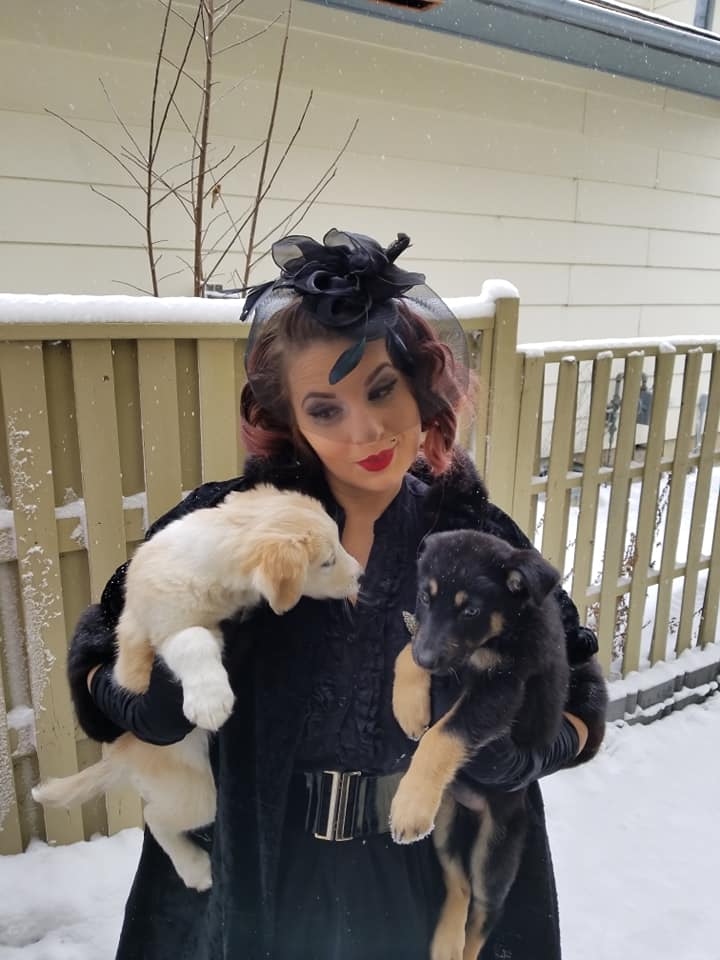 There’s something else that can happen…Not many talk about it and it’s incredibly rare when it does. When your foster doesn’t make it. You see we only started fostering on Oct 25, 2018 and in less than a month we lost our dear sweet Koda. We had him for only 5 days and let me tell you he stole our heart. He had his leg amputated and some more work done on his face but he was a senior who didn’t need to be tossed around so we had already discussed that we were going to make it permanent when he got the all clear. The wonderful volunteers at AARCs brought him a doghouse but it was never meant to be for him.

I think for me that was kinding of the tipping point. It was also the time when I noticed something else. My pain, my sorrow, my sadness wasn’t coming from me but it was coming from the people around me. Yes my heart has always felt broken but feeling the love from all these animals was beginning to fill in the missing pieces. My emotions were coming from Koda. I remember feeling his pain when he awoke for the first time and looking in his eyes and I could tell he just didn’t want to try on three legs anymore. Listening to my husband say he wanted to make it permanent that he loved him too made me feel his heartbreak when we lost him. You see the surgery that was required in order for him to survive went perfectly. As did him not waking up. He was finally at peace and in no more pain. It really became something beautiful. I vowed to myself that right then and there I would do up his doghouse and even put his name on it and if his ashes ever make it back to us I was going to have it blown in glass to replicate red ferns so he could always shine down on us and the fosters ❤ Just like he was born to do, he was happiest when he was free and now free he was.
I had some time to reflect on the loss of Koda with Herbert still in the forefront of it all. It was time that I gave it my all and start working towards Herbert's legacy. I also decided it was time to give up the Red Ruby locks and transition into something a little more blue. It was sadness that brought me to this point in my life where I am ready to start fundraising for Herbert and leave a legacy. I needed to honour that and transition into a period I like to call a decade of mourning, and not because I will be crying the whole time but more because I think it will take me a decade to raise enough for Herbert's legacy and I think his life storey is worth it ❤ I will honour his place in my family by helping animals in need. To give others a safe place to heal and recovery just like we gave to Herb.
So in Honour of Herbert I would like to introduce the metamorphosis of Miss Ruby Sweet Cheeks into Sweet Ruby Bluez and to the next 10 years of committed fundraising to animals in need. Thanks for the read.